The day the Klan came to Italy 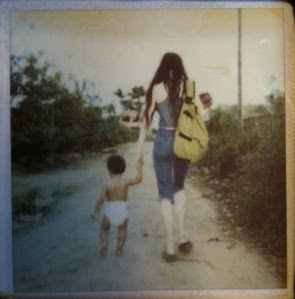 Recently we've been talking about race at home. And today a blog posted by a friend made me remember a particular incident that in its warped way became educational.

My kids grew up on the old Gold Coast, today's Ghana, a country where slavery has a lengthy and even current history. I mentioned the slave forts in my last post, and while not wanting to linger in those cold dungeons I will mention standing in the pit, looking up to where it was said the governor had a wooden walkway installed, so as to look down for the prettiest captive. It was said that a woman who became with child became a freed woman: she did not have to crouch and grovel along the tunnel called 'the gate of no return'.

One of the things about being white in Ghana, apart from sunburn and never being able to be invisible, nor wear swishing local fabrics with any sort of stylishness, was that one often felt one represented the evil conqueror, the culture of the slavers, the scramble for Africa, the whole school of European thinking about the 'noble savage', the many wars of independence, today's neo-colonial wars of mineral wealth and mercenaries...

A heavy burden. But it was my fault. I studied Lenin's Theory of Imperialism in university, where I learned that capital sought new markets in order to refurbish its greedy mechanisms. I also studied African and Asian Independence Movements and in my innocent way fell in love with Isak Dinesen's beautiful opening words, 'I had a farm in Africa' (years after I went to her homestead - not the one used in the film - with a hostile guide who made me feel every bit the Dane handing out sticking plasters and paracetamol).

But back to my educational incident. For I could go on endlessly about the friction between cultures, the discomfort of history, the stories, the stories. The ancestors of today's Ghana were sent off in slave ships to the Americas. Somehow, my half-Ghanaian kid hasn't seriously studied this in school yet, Italian school I might add. They do the Civil Rights Movement, but history, which he fortunately loves, is seriously euro-centric. Perhaps that is why he made this discovery in a school friend's bag he brought home by mistake. It was around Halloween time, everyone was thinking parties, pumpkins. Masks.

My kid pulled out a triangular white cone of cloth with three holes in it. The rest of us, his older siblings, sat there staring. My youngest called out What is it? What's wrong? Slowly, we explained to him. About the raids in the bush. About the men and women chained together, families broken, never to see each other again. About the long congested journey over the oceans with the stench of death.

What type of mother handstitches a child's Halloween mask from this type of terror and cruelty? What type of idiotic being?

I used to fight battles verbally. Charge up to people. Seek justice. Rant and rave. In Africa I learnt how to fight. But strangely, my older kids calmed me. Told me how dumb these people were, how rich. That didn't stop me going to the school and having them labelled, showing my outrage. Seething.

God knows that ignorant woman had better never cross my path.
Posted by chillcat at 05:24 5 comments: 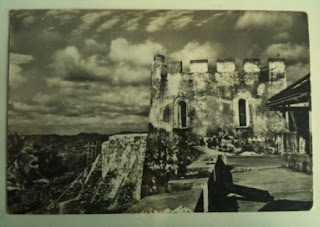 Years ago I wrote a story. It was the first time I tried to write anything after our return from Ghana. We had moved into a frigid old house in the middle of fields, the fog low upon us, rudimentary heating and the occasional country mouse. It was hard. If I thought living in the tropics was hard - malaria, thieves, power cuts, no water - I had no idea.

Eventually I pulled myself together and started to write. I was inspired by a postcard I had for some reason attached above my bed. It showed the Princes Town Fort along the Western Region coast, originally built by a Brandenburg Prince with stones imported from Prussia. It would have been the last construction seen by many a terrified slave sent across the Atlantic.

Along the sea there are several of these forts, evil bastions set among the coconut palms. Though they are frilled with fishing boats and market mammies and gleeful children, they are cruel to the core, chilly inside, burdened with enraged and frightened souls.

I don't know why I kept the postcard. We only visited that area a few times, and there were other more extensive structures at Cape Coast and Elmina where we took visitors to see the museums. This was a smaller, quieter place. But mouldy and dark; cruel. Deep down I suspect that is why I put that postcard on the wall in those early days. I had just been through a long period of cruelty, a grave injustice, a situation I never thought I would escape.

My story was originally long. Too long, too loaded. A failed son of the old regime comes back to Ghana to his hometown near the fort to witness his half-sister's last days. Her body is devoured by AIDS. His cranky mother wants the young woman's shame banished from the house. Eugene, my character, does not know how to act in this contemporary African society whose traditions he has not absorbed from birth. He is British-educated, a visitor here, only able to see so far.

Now, 'Infection' is up for publication with a prestigious magazine next year, and is part of my collection Pelt and Other Stories, the contract for which I excitedly signed this week.

Read my interview on http://womensfictionwriters.wordpress.com
Posted by chillcat at 01:54 13 comments: