On the road, always 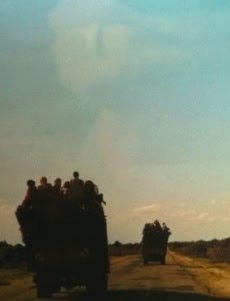 Last year a friend nearly fell over his feet when I said I hadn't read Jack Kerouac's classic 'On the Road'. Shamefully, I had not. Not even when I left my continent at 21-and-a-day, never to return, a woman who's been on the road for decades.

So I ordered a copy on Amazon and read it into the night.

For those of you who read Kerouac at the appropriate age - I would say an itchy-footed nineteen - I'm sure the book held its allure. I probably would have fallen for its powerful flux of restless movement, moneyless, sex and young love under endless starry skies. And its gaudy untempered language, the rush of it.

But as a post-40 year old who has done a lot of moving around, given birth in a third world hospital, gotten lost in deserts, been moneyless in Bamako and other assorted places, had AIDs victims in the household, Kerouac's book didn't make me feel like overturning the boat. Throughout, I was conscious of Kerouac's landmark style, an albatross that almost condemned him to early death through alcohol abuse - that I adored. But his restlessness became irritating early on, as well as his young self-centredness. As I read I couldn't help wondering how his writing style might have expanded and his subject matter deepened as he reached middle age, as his excitability ebbed and his inwardness changed shape.

That was what I wanted. I even wondered if the guy who suggested the book had remained braked in his twenties, imploded and repressed, unable to grow up.


As I have moved I have written diaries, but these diaries are tied together, locked in a cupboard, for no eyes to see. They are private. What I was searching for in Paris at twenty, as I cropped my hair and grew skinny and did the Lolita with older men, I no longer wish to know. I remember one summer I hired a car and drove it around France, from top to bottom, stopping at every town looming on the flat horizon, examining haunted Gothic cathedrals with the passion of a young woman with a shoddy colonial past. On one occasion I remember buying strawberries from a market, knocking on a man's door to open a bottle of wine, and stretching out in my bikini in a field full of cows.
Posted by chillcat at 07:40 4 comments: