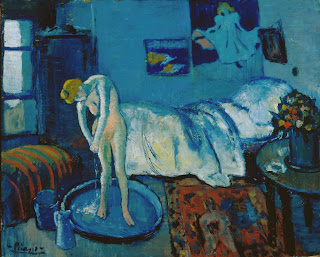 Everyone has a Blue Period. I don't mean Blue as in The Blues, but rather a retreat into a monochromed world. That's where I've been hiding. Mostly, I've been hard at work writing new stories, editing this new collection, trying to push this baby into shape. I've had quite a few new stories published, and done more readings in London, where I've discovered that half a vodka tonic is this author's perfect prep for a performance. Plus steady - not teetering - shoes.

But this is going to be a quiet post. No large ideas or twists, as I feel as though I've stepped aside from the blogging world and spent way too much time hiking on the mountain behind the house. Or coffee-chugging in front of the screen, playing with my characters. Or just getting on - as we all do - with what must be done. The thrill of publication is one thing, but it doesn't happen without the birth of some idea, the formation of a story, the submission of this story, its probable rejection, revision, resubmission.. and then.. and then..

My story 'Yann at Night' came out in Flight Journal, in an issue including an interview with my short story crush, May-Lan Tan, who says she listens to techno while she writes! May-Lan has a lot to say about loneliness, navigation through languages, and the violence of words. And stories you have been writing since you were four. If you haven't found an author to adore lately, read the interview and try Things to Make and Break.

'..and if I can ever write anything that affects people the way music does, that would be the best thing I could do. I think you could spend your whole life trying to do that. But there are so many limits with language—that’s why rhythm and melody become very important.'

'I think with any writer, your language is your weapon but it’s your prison as well.' 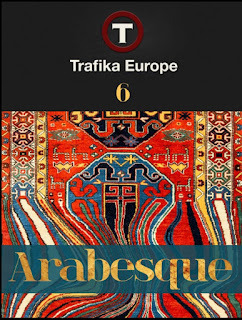 I was also surprised to be included in the Arabesque issue of Trafika Europe, a rich collection of mostly Arab-language writers living in Europe. 'Astragal' speaks of the harsh geology of ancient mountains, reflected in the harshness between men and women. Set in the Dolomites where a young girl disappears, the story sets in motion the craving for hope.

Another piece, 'A Very Tall Lady', was surprisingly commended in the Prole Short Story Competition, while 'Tales from Bodri Beach', which sees a family reunion on a Corsican beach, appeared in Lakeview Journal. So a pleasing end of year for this author.

But now the time has come to wonder. This blog - Pelt and Other Stories - has provided a wonderful base to discuss short stories and attempt to understand the form, however I think it's time for a new arena -  perhaps even a Rose Period? - to speak of these and other things.

If you've followed me this far, Thank You. I'll soon be posting news about a new author website.
Posted by chillcat at 06:48 No comments: