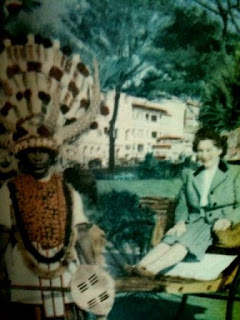 Back in the 90s I was a diplomat's wife about to go into existential crisis. But before I did (there is always lots of writing material in any sort of crisis), I wrote this story. It was when I belonged to the bitchy French Ambassadors' Wives Literary Club. It was when I wore linen suits to cocktail parties. It was when I hadn't even tried local Ghanaian food, nor eaten with my hands, nor driven around that hot rich country except in a convoy of diplomatic corps vehicles that were never flagged down.

I didn't fit well in that arid world of shimmering swimming pools, gardeners bent over lawns, whispering house staff. Nor with the French Ambassadors' Wives who took their dinner parties so seriously; their charity events, their art purchases.

It amazed me how people who I knew were ordinary in Europe, who pushed their own shopping trolleys, looked for specials along supermarket aisles and took out their own garbage under the moon, were able to hoist themselves above a whole society of people, a nation where they were guests.

After my crisis that changed. And so did my stories. But this one belongs to that period. It was picked out, I don't even remember how, by Virago, and placed in an anthology of women writers called 'Wild Cards'. I still remember walking down Shaftsbury Avenue with my new lover and baby, and seeing the book jacket in the window. Colossal, beaming pride.

This month Cartography is Story of the Month on www.inktears.com, and it will be part of my collection 'Pelt and Other Stories' coming out next year. It makes me think of cool nights, friction, skin.

If Della had never walked into that café in Stuttgart looking for her German-loving friend Stacey Mahler she would never have ended up at the bar with Luce and his odd, leggy son. Luce who was leaving for West Africa in a week; Luce who said There are other worlds while exerting a take-it-or-leave it pressure on her knee. Della wrote to Stacey a month later from the rainy season, half-deluded by the stinking multifarious setting, half-drenched by Luce’s unfiltered sexual coaching. What Della had been told afterwards was that Luce’s thirty-six-year-old wife Chanel had perished in a plane crash on a runway in northern Nigeria. If Della had siphoned off moments of the tragedy to crystallise her own mortality, she was also conscious of being a fast substitute. Uneasy, beyond her climax of flames and metal she might think: Luce had made love to a woman who had died.
Posted by chillcat at 03:26 4 comments:

The Year of the Short Story

I heard it on the blogvine. That 2012 is the Year of the Short Story. Did you know? This makes me thrilled for two reasons. First because my short story collection has been accepted for publication and will be coming out with this spirit in the air (sadly not till 2013 – I have my debut novel on my other plate!), and next and more roundly because it will increase the standing of this accessible but tricky form.

As a young thing I never wanted to study writing. Didn’t want to have my ideas pushed into shape. I was devoted to Katherine Mansfield, whose shimmering stories I think we should still go back to read. To feel the lightness of a beautifully seamed work, its spilling cloth and crafted movement. To travel quickly grasping the writer’s knowing hand. To feel pulse, labour, precision.

I’m sure so many short story writers have heard it all before – the marvels of the short story, with sudden gusto brought forth by big publishing companies while many have toiled long into the night with smaller publishing companies, or independents, or in self-publishing. But surely there is still reason to celebrate, to dress up and come to the party, wearing an extravagant pair of heels?

I’ll be there. Etherbooks have just put up two more stories of mine on www.etherbooks.com. For the unconvinced, my story ‘Innocent’ is free. Try this for size: Flemish aid worker Toby Vlaminck deals with a kleptomaniac driver wearing Peter Fonda sunglasses.

The Year of Well-Written Wonders.
Posted by chillcat at 04:13 No comments: