Nail polish, tube delays and the trouble with writers

Any excuse to head to London is a good one but the best have to do with meeting other authors and hearing them speak about their work. While the usual zany things occurred - such as spending a half day hunting down contact lenses with a daft son and having my fingers and toenails painted by my favourite thirteen-year-old 'niece' - on Saturday night I rocked up to another stunning Word Factory session and on Monday evening I heard wonderful Alison Macleod speak about her Booker longlisted novel Unexploded.

Along the way I met up with Rowena Macdonald (Smoked Meat), with whom I read at the December Word Factory event in Soho, Isobel Costello, who writes the successful On the Literary Sofa blog and has a novel in the works, the fabulous (& similarly henna-headed) Tania Hershman, who is a champion of the short story form (My Mother is an Upright Piano), and lovely writers Zoe Gilbert and K.J.Orr.

The Word Factory is a brilliant, brilliant short story salon set up by Cathy Galvin, where emerging and established authors alike present their work once a month to an entranced audience. It takes place downstairs at Waterstones Piccadilly - a glass of wine and cheery hello from WF Deputy Paul McVeigh. On Saturday Holly Dawson read a short story she honed with author Alex Preston. Holly and Rebecca Swirsky won the inaugural Word Factory mentorship scheme and have been working with Alex Preston and Stella Duffy over the past few months. I missed Rebecca's reading in January but thoroughly enjoyed Holly's eerie, unsettling story and her polished reading. Holly spoke about her experience with mentor Alex Preston (a tonne of must-read books!) and wrote this article - Are You Sitting Comfortably - about how nervy public speaking can be, after canvassing Thresholds members for tips. Alex Preston then read a resounding story weaving history and geology and a cross carved into the palm of a brutal mining disaster survivor (the two threads of the story interspersed by a cool karate chop). And Toby Litt showed his authorial agility by reading a transporting short story, an excerpt from an article speaking of Literature versus Literary Fiction, and a poem! And to boot, Toby says he is currently working on a comic project. 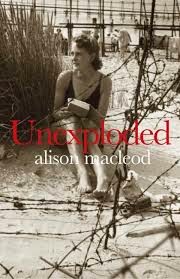 On Monday I was lucky enough to hear Alison MacLeod interviewed about her novel Unexploded, which takes place in Alison's adopted home town of Brighton, during the Second World War. Alison spoke of the charge of fear that ran through the community as the Germans threatened to invade, a hidden internment camp and the influences behind her poignant characters who deal with love and fear and uncertainty. She read scenes that were both touching and rich with language. I haven't yet read Unexploded - it sits on my bookshelf! - and look forward to delving into it.

On my last day I sat on the train thinking over and over about the different types of authors I had met. Many are super-qualified in an academic sense, some are winging it, some have kids and families, others don't; all are working dreadfully hard to feed their art. Of course there was a tube delay so I had plenty of time to revolve my thoughts. Is it better to be an academic, or commercial, to have a crowd, to be public, or to live in a coccoon and count the tractors going by?

It shouldn't really matter. That's what I think. And you know what's the trouble with writers? That - from what I've seen so far - they are a cohesive, especially generous bunch who, like this country mouse, are happiest when they can run off, when they are at their desks, when they are doing it.
Posted by chillcat at 04:52