An Interview: Love on the Road Anthology 2015 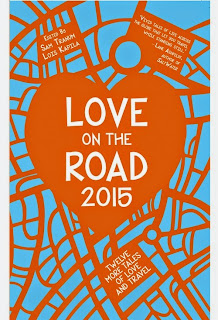 So many times we are told that short stories do not sell, that they are an unrewarded labour of love for writer and publisher alike. And yet. Am I wrong in sensing a slight upswing in short-story-loving these days?

The Love on the Road Anthology 2015: Twelve More Tales of Love and Travel seems to be a declaration of this sort. A striking collection that editors Sam Tranum and Lois Kapila have noted is a personal project that has grown wings, LOTR 2015 is the second edition of a competition anthology initially launched in 2013. It came to life, one evening, in a humid Kolkata bar.  Sam and Lois, avid travellers who have long covered the ills of the world as journalists, decided to look at love on the road. It might have been one of those dreamy bar moments when you make resolutions and leaps in the air, but Sam and Lois went home and set up a competition, gathered respected judges and began reading submissions. And not only have they given voice to two dozen writers in two anthology editions, they are selling copies!

I entered last year's competition with a story not about love on the road, more like love down the road - meaning many years after the fact. I didn't think I'd have a chance as it wasn't perfumed with romance, and the relationship portrayed had failed. As a finalist I joined eleven other internationals with stories that are so diverse, so off-beat and challenging - nothing to do with smooches and skylines. Just work that is alive, buzzing with the intimacy and fractures and fall-out of love.

Fellow writers came from all over the globe and have been broadly published, with story lines including a chat-up in a Zimbabwe queue, a gender change within a hetero couple, a Filipino schoolgirl who will soon discover that her 'love' has cost her her freedom, an American writer-vet kidnapped by a crazed surrogate mother, a relationship reassessment on the steps of the Acropolis. Many facets and forms of love are represented in rich, contrasting contexts. These stories speak not only of selflessness and acceptance, but also submission, abuse, appropriation and the darker shades of love.

1. I read that you encouraged submissions from all English-speaking corners of the globe. How was the response?

Sam: It was easy to get submissions from the US, the UK, Ireland, Australia and New Zealand. To reach people in those countries, you just have to post something online it spreads, as long as it's relatively appealing. Reaching out to writers in other places with lots of people writing in English (such as India, Pakistan, Nigeria, Ghana, Kenya and South Africa) was a bit trickier, for two reasons: the call for submission didn't spread as smoothly online, and it's legally and logistically difficult for people in some of those places to pay the reading fee online. So it took a little more work and flexibility to encourage submissions from those places. In the end, though, we got piles of stories from all sorts of places, which was really nice. One of our goals was to include in the anthology a wide range of perspectives on the theme, and I think we were able to do that.

2. Did you find many common 'love' elements or patterns in the submissions you read?

Sam: The writers who were good enough to submit to our contest were really creative. They approached the theme from perspectives I definitely didn't expect. But there were a few patterns in the submissions. We got several stories set in Paris; I guess a lot of people associate Paris with love. Writers from the US seemed more likely to include explicit sex scenes in their love stories than writers from other places. There were also a fair number of stories set in the US (not necessarily by US writers) in the 1960s, involving road-trips. Most of the stories were fiction, although we were accepting both fiction and nonfiction.

3. You guys have seen a broad spectrum of human behaviour in diverse contexts through your work as international journalists. Did this influence the type of stories you selected for your final twelve?

Sam: It was curiosity that led me to journalism and to travel, and I think that's true for Lois, too. And it was with curiosity that I approached my judging. I was looking for good writing and engaging stories, but I was also looking for something interesting, something new, something I hadn't read before, something to pique and then satisfy my curiosity.

4. Did you have any specific interest in place?

Lois: I think we looked for stories where the place and characters and love all mesh well together.

5. What kind of love made you read on?

Lois: You know, it's hard to answer that because looking back at the stories we selected, they include all kinds of love. There's the traditional boy-meets-girl in The Queue, which is set in the line for the post office in a town in Zimbabwe. And there's the dark side of love in Not a Finger More which explores an abusive relationship. I would say though that I find the platonic but deep love in Sunrise over Sausalito the most compelling. It follows the relationship between this rich old guy and his orderly, as they check out from an old-people's home and road-trip across the US. It's funny and absurd and sad, and shows how love can appear in the strangest of places.

6. Is love better on the road?

Lois: No, it's very uncomfortable. Sorry, bad joke. I guess that's a personal thing and it probably depends on whether you meet somebody for a holiday romance, and why you are travelling. In some ways, it's dangerous to travel with a partner. We often look silly out of context. We've adapted to where we live, and when we travel we can look helpless and ridiculous. You get sunburnt, or can't hail a taxi, or get sick and green. If you're going on holiday, it's usually short-lived. But for those who are forced to move from a home country to a new place, it can be a real strain on a relationship I think. If you can't find a job, or wrap your tongue around a language. You might have defined yourself as a useful person and partner, and suddenly you're flailing.

Thanks Sam and Lois for taking the time to reply! The best way to buy a copy of Love on the Road 2015 is through Liberties Press Ireland so get those fingers typing!

Posted by chillcat at 04:45 No comments: