On Wrestling and Rejection


Yesterday I received my third rejection this year. Oh well. Not the end of the world, but a bummer. What do you do when you have a piece rejected? I know: it's time to seriously revise, zen out big time. Then go into secretary mode. Send it off again, get it out of here.

The good news is that for every three to six rejections - BINGO! - I often get my foot in the door. Yesterday I also received corrections for a piece that is coming out in a hip literary magazine (I'll blab when it goes to print) with comments from my adorable editor whom I met -by chance- while working in Paris in January. Sometimes it all comes together, hey?

And last week I received the publishing agreement for another piece I have coming out in the summer, and news that I will be paid £100! Rather breathtaking for this poor author.

Neither of these stories was accepted the first time they were submitted. The first was praised by several editors, but was submitted 6 times. The second, while they were interested from the start, had to be shortened by 3000 words and went through a sophisticated editorial board before it was accepted. Over a year of waiting!

It's agonising, isn't it? Are there any rules to this? I have had pieces I think are worthwhile rejected again and again, and a story I ran off and hardly checked accepted with embarrassing praise. Why does one editor accept a piece and another sends you a form rejection slip? Why does one rave about your work and perhaps another not reply at all?

Try this for size: Unfortunately, we aren't able to accept this story for publication.. There are many possible reasons for turning down a story, and we regularly turn down great work just because it isn't quite right for us..

I mean, what a tease. Are they just being nice letting you think that yours may have been that 'great' piece that they've had to let slip away? Hmmm. I'm not convinced. Even Granta editor Ellah Allfrey recently said they've done away with reading interns because they weren't able to identify great work. (Perhaps some of mine that came trickling back?)

As we all know, small magazine are run on the whiff of an oily rag. They involve passion, sacrifice. Choice of material comes down to individual taste. Magazine space. Prior acceptances. Issue themes. I recently had one piece put on hold by a magazine I've been trying to break into for yonks, because it didn't fit their themed issue for March. Now it's going through the mill for the next selection. Groan. But happy groan. It makes acceptance feel like a mix of luck, talent and serendipity - on top of all your hard creative work.

I read a great blog post ages back by American writer Robin Black, whose first collection 'If I Loved You I Would Tell You This' came out to wonderful reviews and is an unforgettable read. She speaks about this drama. Why this story yes, and now?

Sometimes it's like a slap in the face. You might feel wounded and down, but don't give up the fight!

I Had a Gallery in Africa

Readers familiar with Isak Dinesen's work might remember this first line from her famous book 'Out of Africa'. I first had it drummed into me by my dreamy African history professor many years ago at university. Isak Dinesen-Karen Blixen's stirring first line read,

I had a farm in Africa, at the foot of the Ngong Hills.

And her sweeping autobiography told of her sad life in colonial Kenya as a failing coffee plantation owner, as an unhappy wife, as a bereaved mistress. We all remember the breathtaking shots from Sidney Pollack's Oscar-winning film: Robert Redford's Gypsy Moth moving over the green hills of East Africa; Meryl Streep grieving on her dramatic country verandah.

As much as I was entranced by these words, I soon felt guilty for ever being swayed by them. As a young wife posted in pre-war Mogadishu, we visited Isak Dinesen's house on the outskirts of Nairobi. We walked quietly through the preserved, wood-lined rooms, past her trunks, onto the waiting verandah. The guide that day was irritated to see us and unhappily answered our silly questions about Meryl Streep. No, it wasn't the house they used in the movie. Yes, they are the Ngong Hills.

Not a very magical visit, and if one reads the novel (rather than the cheesy film) one sees that Dinesen's personal melancholy is almost on a par with that of the thwarted, subjugated Kenyans, while figures like Denys Finch-Hatton-Robert Redford commanded the skies and hunted the animals.

Years later I had my own flawed dream in West Africa where I lived for a good many years. I've always collected traditional art. Not high end pieces but rather good copies and some surprising authentic works. I love sculptures, fabrics, silver.

So I put together a gallery. Like Dinesen I had a mournful time of it for various reasons. Sometimes, I look at the pieces I salvaged and they give me uneasy comfort. 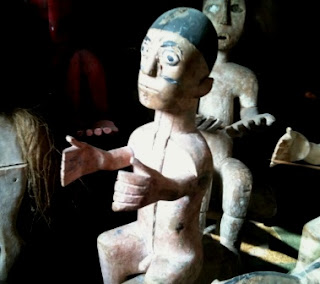 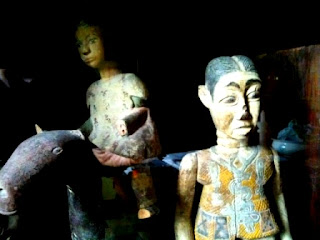 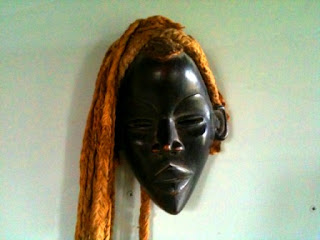 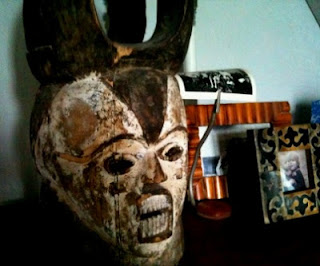