Many questions fleet across the mind of the person who chooses to follow some sort of creative vein in his or her life. And this happens every other stinking day. No?

I'd say this is a healthy way of going ahead. Self-doubt is a better editor and BFF than over-confidence. Ideas must be questioned and shaken down. Belief ought to be able to sail through cascades of depression. And our arch enemy and twin sister REJECTION must be embraced, strangled and sent packing.

But not for all of us, this quest for publication, sales, reviews, acknowledgement. Some of us are secretive. Alarmingly so.

The other Sunday morning I turned up to a Saint Germain cinema with three other people and saw a documentary called 'Finding Vivian Maier'. You might want to jot this down. Or follow the link, godammit, so much less romantic.. 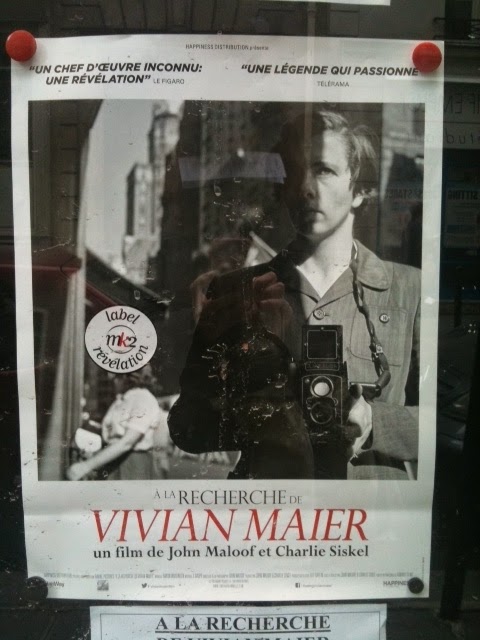 A young American guy called John Maloof, who grew up following his Dad around flea markets, bought up a stash of negatives and discovered a monstrous and brilliant body of work of an unknown American photographer called Vivian Maier. Her work, mostly street shots taken in Chicago, spanned from the uptight fifties to the cool seventies and opulent eighties, until she tapered off and died in poverty beside one of the great lakes. The documentary was about this young man's piecing together of Maier's secretive, sour and slightly manic life. It was about him trying to find the pulse of her decades of humble babysitting, and how this rubbed against her obsessively raw and telling images, all of which were hidden away within the stashes of newspapers and hats and brooches and boxes and negatives and rolls of undeveloped film she left behind in storage facilities to be auctioned anonymously.

The woman was a grand artist. Browse through her photographs and you will have humanity slap you in the face. Read a little about her life and you will feel queasy questions forming. Why did she live behind herself, as it were, her passion almost a hidden crime? Why did she never relate to the social world she documented so ably, except through the lives of the children she minded, occasionally roughly, and definitely in an unusual way.

Was she an abused woman whose oxygen came through this outlet? Did she ever try to obtain recognition and, if not, why not? Did she believe in herself (I think the answer is yes - her confidence is almost chilling).

It is an intriguing story, well told, compelling, saddening. No twists. Alarming work. It makes one wonder: what is the real driving force behind the artist? A perfection of the work and its aims? Can this be enough? Should this be enough? What did this woman feel about this life-force running through her? Did she not require the company of like minds? Or was her work made so much stronger for being shielded? An evolution without distraction, stories adrift and all the more powerful?

I confess I have always found photography to be so close to short story writing. Another language - yes - but the same boisterous, finger-shaking family at the table. Just think: the importance of framing, the capturing - even stealing - of a moment, the fact that there are a range of varying viewpoints and only one will give the dazzling result of a work that is infused, charged and possibly timeless.

Thank you John Maloof for finding Vivian Maier.
Posted by chillcat at 05:23 No comments: