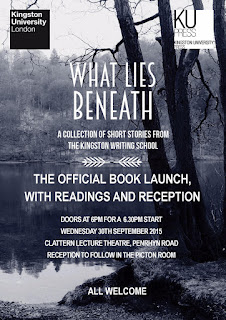 Last year I entered a competition thinking the usual: Why am doing this? I'm just setting myself up for disappointment. I'll never get anywhere. This story is whacky why on earth would Hilary Mantel like it?

Because - yes - it was a competition to be judged by Hilary Mantel! The inaugural Hilary Mantel/Kingston University Press International Short Story Competition, set up by Dr. David Rogers, Director of Kingston Writing School and co-Director of Kingston University Press, and Alan McCormack, writer-in-residence for the Kingston Writing School, who proposed the competition idea. A big one. I know - and with a story called 'The Wild Beasts of the Earth will Adore Him', set in a small advertising agency in Ghana - fat chance!!

So of course I forgot about this submission, as one does, and went on through the summer and autumn writing story after story. I was very surprised when I received an email saying I'd made the longlist. This really doesn't happen very often. As much as it may seem otherwise, there are many, many rejections in the way of just one longlisting. These moments are rare, almost the type where you remember exactly where you were when you read the email. (I had to pull over to the side of the road to gasp, in front of the panel beater's.)

I also wasn't allowed  to tell anyone, except the dozens of members of my household over here in Italy (who mostly dont care). I didnt really think anyone would mind. I also started reading Wolf Hall, thinking if Hilary Mantel might be reading my story, then I should be reading hers too.

(Well, no need to say that Wolf Hall was brilliant and I spent days reading non-stop. Outside in the contemporary world I kept seeing heads on poles along the canal, and I couldn't help wishing Anne Boleyn could somehow escape her fate. She was some dame. I also wondered about the lighting back then - candles and lots of dark corners, things catching alight. There was a world to think about, as well as the breadth of the characters.)

In the meantime my story went to the shortlist and I was reeling. I hoped hard, but I didn't join the three finalists. My friend Annemarie Neary did, so I was cheering for her. This is when you throw away your writerly dignity and you smell a win in the air - almost like the smell of blood. I've been a shortlisted finalist before, and that's when the desire to win really kicks in.

But the winner - and deservedly so - was Australian writer Michelle Cahill, whose story 'Duende' was brilliant. Annemarie joined Rick Williams as runner-up. Both authors read their stories - 'One Day in Sarajevo' and 'What Lies Beneath' - at the event I attended last month at Kingston University. Mesmerising, lingering words.

The anthology is a rich collection (edited by David Rogers and Michael Kerin), that includes the shortlisted finalists of the competition and also the winning entries of the KUP Bonnie Greer Stories to Read Aloud Competition. Here's what Hilary Mantel had to say in the generous and inspiring introduction:

There are few limits to what a short story can do. One of the greatest of all practitioners, William Trevor, once described the skill involved as 'the art of the glimpse'... Imagine opening a window, on to a wild landscape: that is the kind of glimpse I think he means. Five seconds tells you the country is immense, the gale is blowing.

Remarkable! And well worth a read given the wide reach and varied texture of the stories.

(I shouldn't really say this, but worth it for the introduction alone.. Hilary Mantel's words 'The Wild Beasts of the Earth Will Adore Him', by Catherine McNamara, was strongly atmospheric from the first sentence' are still making this writer feel quite dizzy..)