This year has been a year of much short story movement, interspersed (I promise!) with long stretches in ugg boots at my desk. But sometimes a girl has to catch a ride, catch a plane, catch a ride, and get off the continent back to her spoken language.

Last month I ventured out again and it is always a treat that fires me up when I come home. In fact I am chained to my screen even more avidly each time I come back. Each story has to be better, stronger, more accessible and startling and vigorous than the last, with no showing off (all my darlings headless and buried) and ideas gently wafted under the reader’s nose… dream on Cat… 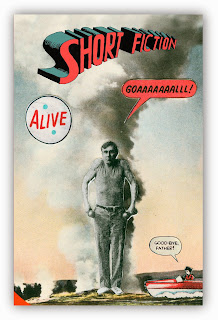 So I went to Plymouth for the International Book Festival, where this year’s stunning Short Fiction 8 was launched. My story ‘Adieu, Mon Doux Rivage’ was a shortlisted finalist and I read out the section I will include below, sharing the stage with contributor Mariko Nagai and super editor Tom Vowler. SF8 doesn’t usually publish authors two years running and my Pelt story ‘Montgomery Akuofo, Father of Twins’ appeared last year, so I was highly honoured to be somehow breaking the rules. Grand thank you to editors Tom, Anthony Caleshu and Jamie Edgecombe. And how lovely to meet up with Vienna (the 13th International Conference for the Short Story in English) veteran Lucy Durneen!

If you are a lover of contemporary short story variety and vibrancy, do order a copy and enjoy the work of top-ranking writers including Deborah Eisenberg, Alison Moore, Alex Preston and Adnan Mahmutovic. Short Story Superhero Scott Pack is reviewing the collection this week, with one tantalising story a day.
* 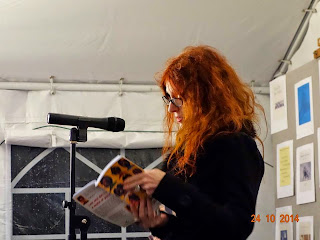 And then I found myself at a poetry festival! Tears in the Fence – edited by the brilliant poet David Caddy – celebrated thirty years of independent publishing last month and being a two-time contributor (short stories x2!) I thought I might pop along and try the waters. Held in beautiful Dorset, writer mate Alison Lock and I read to a warm group on a chilly night, much aided by Badger Ale (and later, hot chocolate and an Abba documentary!). Apart from listening to some astounding work, the evening taught me a lot about eloquence and performance. The poets brought a colourful charge onto the stage and had to express and be their work. By comparison we short story readers had to step aside, read rather more blandly, and let the words expand the story, drawing the listeners into our world. An interesting and very marked difference!
(ps: thanks to Lesley Burt for that photo)
*
Meanwhile back in Londontown there was a Word Factory event. Readers will know how much I love this literary salon, organised by Cathy Galvin and Vice Director Paul McVeigh, with a team of wonderful helpers. This session began with original thinker and Sunday Times shortlistee Adam Marek, followed by Tessa Hadley whose beautiful works appears in The New Yorker, and David Constantine, remarkable winner of the Frank O’Connor International Short Story Award.

This country mouse can’t think of a better place to be than central London with a glass of red and three excellent short story writers talking shop - and great Chinese afterwards!

There are four of us on the boat. Jean-Luc and myself, and Belgian music manager Raoul Vidal and his Japanese soprano wife Mieko Inoue. Raoul, big as a cupboard, stands on the deck with arms folded, squinting back at the coast. After a few days he’s discarded his shirt. When Mieko comes on deck he bends over her like a poised wave and whatever they say is soundless. Jean-Luc has read up that she sang at Covent Garden twice, but he is pretty sure her career has flatlined. Jean-Luc has a nose for these things. He was the drummer from my old band in Marseilles.
They’ve booked for a week long cruise, emailed me strict diet instructions (no gluten, no sugar or cheese, preferably grilled seafood). Looking at Raoul, I’d say he was brought up on moules frites and tankards of beer. I once toured in Belgium with an all-female group and this is the truth: they fry pigs’ blood sausages in butter. This is something that should be explained.

Raoul has picked me up a few times when I am having a quick puff at the stern. They are just small criticisms or needs. Do you have sanitary napkins? Could you chop the cabbage in the salad a little finer for Mieko’s digestion? All over his body his skin has surrendered to the sharp summer sun and it explodes in blisters wishing to be pricked. His nose is peeling and he doesn’t care, which in turn means that Mieko doesn’t either. He asks, Do you have any copies of The New Yorker? I shake my head. I imagine he is used to long lunches.

Their suite at the bow of the boat must be pleasing to Mieko. She stays there a lot. On my way to the laundry cupboard I think I hear a sound – a voice ascending – but this ceases on its path. The boat moves on with a steady rolling. When I back into her with clean linen in the galley I hear a word that is released at great cost: Sorry. She looks at me at with my pile of clean towels and fresh sheets. It seems as though she wants to take this word back. I should ask if there is anything she needs or remind her to ask me for sea-sickness tablets if she feels unwell. She is carrying a big hat and a Japanese novel. Most probably because my ragged blue-painted nails are on show and Jean-Luc says I have feet like a platypus, I have made it my mission to see the opera singer’s toes. Mieko wears a pair of closed black espadrilles and her feet are pressed into their jute spirals.

Jean-Luc has given Raoul a Michel Houellebecq novel in French, the one where they massacre the tourists. Raoul sits on a bench and reads it through like a man on a train, his back in burning shreds. Mieko drapes herself on a deckchair fully clothed. For a long time she does not read. They sit far from each other on the deck. Before it’s time to prepare lunch I sit with Jean-Luc at the stern. We’ve just come through a rough patch. Jean-Luc misses the band life. He came to sailing late and has doubts on the water. He doesn’t like me second-calling him and stresses out when we anchor or come into port. Jean-Luc puts his hand on my thigh. As his fingers dig in I watch the fuzzy-edged scorpion inked into his skin. His nails are broken and black. The wind is high, higher than he’d like, and he has cleated both sails tightly as we cut as close as possible to the coast. We can see the point of Nonza now, the town stranded high above the pebbled black beach as though washed up in a storm. Once we are in the enclave I will set up lunch, the sole meunière Mieko just tolerates, with an avocado salad that perhaps she will not. Though initially she said she would eat prawns, her face dropped yesterday when I grilled a dozen scampi. Raoul removed the platter. There has been a misunderstanding, he said, after tilting the plate in the wash. Mieko does not eat prawns.