Agent Hunter or How to Thrill a UK Literary Agent

Any writer who is unfortunate enough to be agentless in these hard times is going to be breaking out in a light sweat now. How's this for a useful new website: a stash a UK agents and agencies, a list of preferences, clients and contact details; even cocktail preferences and shoe sizes… joking !

But seriously, have you ever wanted to size up an agent before you - trembling - send in your precious manuscript? Have you ever wanted to see beyond the sometimes clunky or bereft agency website and have some outside info? Wouldn't it be more helpful to see a smiling face, or have half your submission information hunting done for you? i.e. Does this agency take on overseas clients? Are they keen to take on new authors?

The people behind Agent Hunter have worked hard. Set up by a team lead by Harry Bingham, successful author and the man behind the very useful The Writers' Workshop website, it goes a long way in bringing wannabe authors into agents' laps. For we writers know that agents are an intractable bunch, living in London offices surrounded by mile-high slush piles, that they are gatekeepers of the impenetrable industry of successful publication... Isn't that the case?

Spend a few hours on the Agent Hunter website and your mind will boggle. There is such a wealth of information! You can set up/save your search to hunt for agents, agencies or publishers, and be prepared to be entranced for several hours. As someone who used to buy The Writers' and Artists' Yearbook every few years, this is a much more agile and efficient way of accessing information, which hopefully the authors will keep up-to-date.

Reader-friendly (most important!), Agent Hunter includes comments from agents (apparently the ones willing to write these down - some are surprisingly heartfelt), often a photograph and a list of preferences, background and attitudes, as well as links to agencies, blogs and twitter addresses. Do you want an agent who tweets or blogs? Do you want to know whether they take on small fry like yourself? So much research time is honed down into a series of easy steps - letting you zoom in on agents who suit your needs best.

Some of the links didn't work however, which may be a newbie hitch. And there were quite a few agents listed who have no website - hard to take seriously these days. And, as a short story writer keen to catch the revived interest in the form, I'd have liked to have seen Short Stories included in their genre search category. But again, I'm sure these are early days and the site will iron these things out.

Subscription is a mere £12 a year, and I'm certain there will be a flurry of members keen to know where best to send off their manuscripts. Vital information and links are also provided dealing with query letters and editing consultation. My hope is that the site expands to include more small presses in its publishing category, and perhaps some more agents in vigorous writing enclaves such as Bristol (though there are some of these already).

Have a look or sign up for a 7 day free trial. There is a lot of wisdom and crucial information in there. The mind boggles..

DISCLAIMER : Catherine was given a free subscription by Agent Hunter in exchange for a fair review. She intends to have an agent by the end of the year thanks to this website! 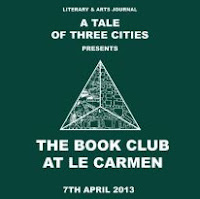 * * * * *
Issue Two of the fab literary review 'A Tale of Three Cities' was launched in Paris at the Bookclub Le Carmen on Sunday night. Congratulations to fellow contributor Kate Tempest who just won the Ted Hughes Poetry Award. My story 'Taxidermy', set in Berlin, is in this issue. I'm so happy!
'A Tale of Three Cities' is the first arts journal to salute Europe's golden triangle: London, Paris and Berlin. Check out the website shop to order/buy  your copy or pop into SHAKESPEARE & COMPANY, PARIS!
Posted by chillcat at 03:43 2 comments: