It has been the most astonishing literary summer. At first it was the second edition of the London Short Story Festival in late June, directed by the energetic and generous Paul McVeigh, and efficiently managed by London’s Spread the Word. For four days Piccadilly Waterstones was awash with short story writers and aficionados: old mates catching up or latecomers flying to talks, bright smiles on faces after invigorating workshops; some of us sneaking upstairs to the cocktail bar in between sessions, the braver of us shyly approaching festival readers at the inevitable pub bash afterwards.
Four days of short story riches, involving newer writers such as May-Lan Tan, author of CB Editions’ Things to Make and Break, who read from her chapbook Girly, and seasoned authors like Ben Okri, who read one of my favourite stories, the title piece from his collection Incidents in the Shrine. Two exceptional events. There were also readings from Canadian D.W. Wilson, (his heartbreaking story ‘Mountain Under Sea’) and the admirable Kevin Barry, who shuffled away after a brilliant reading and a run of amusing off-beat writing tips: Barry maintains he writes ‘primarily out of anxiety’ and puts his ‘blood and guts onto the page’ and thinks ‘more of food than short stories’ . I took part in one workshop with Mr. Okri which involved learning how to be attuned to the arrival of inspiration (such as when one is house-painting!)and how to let go of pre-packaged thought and embrace ideas fearlessly.

Later in the summer I was back in London for two exciting launches. I was lucky to have two short stories accepted by two different publications, Fugue Volume II (The Siren Press), and Structo 14. So I rocked up to Bloomsbury one Friday night, and Soho the night afterwards. Two wonderful evenings of listening to other writers read, meeting the Editors, and seeing the stories you’ve been peddling in print. Surely more rewarding than a new pair of heels? 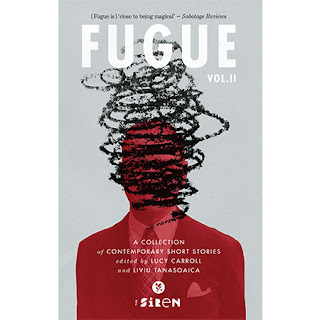 With the Fugue Volume I receiving enthusiastic reviews (‘close to being magical’ – Sabotage Reviews), Lucy Carroll, Editor of The Siren Press, had a difficult act to follow.  I remember the submission call for Fugue Volume II suggested the editors were interested in the quirky and offbeat. I sent off one of my kinkiest pieces, ‘Three Days in Hong Kong’, and hoped for the best.  I was thrilled when it quickly made the cut.

How to compile a short story collection that is original and captivating, that will sell copies for a fledgling publishing company in a world that mostly disregards the medium? I always ask myself this when I pick up an anthology – of which there are so many dazzling examples around. I may be biased because my story is included in this book, but I think that Editors Lucy Carroll and Liviu Tanasoaica have harnessed a collective of buzzing modern energy: alienation and undertow; authors whose work jars, but gels together.

In the Editorial: The Fuguists are a diverse group of writers.. try and think of their efforts as a literary experiment, indicative of a contemporary fascination with character psychology. In this way we have pieces such as ‘Scarlet Streets’ by L.D. Lipinski, a blood-dripping sketch of teenhood in an abattoir-dependent town, and Alyson Hallett’s dreamy homage to Munch’s scream in a layered rendering of child abuse and murder; and Brandon Robshaw's tale of a lesson plan gone horribly off course. Clare Fisher’s ‘You Are Not Sorry’ portrays a lonely lying woman in a series of Facebook Messenger riffs, and we are entranced by the underlying powers that a new home inflicts upon a young married couple in Sally Oliver’s ‘Hole in the Wall’. There is much awkwardness, tension, and lapses of reason that betray the fuzziness of the temporal world and the intrusion of marred realities.

In common, the characters in the eight stories perhaps seem to be elusive, edgy, even abrasive. The character voices are intimate, often in the first person, strident, brittle and aware. The Fuguist world is a modern arena skirted by minor social despair. Characters crave attention and acknowledgement; communication often collapses; there is a lack of connection with a harsh, overwhelming outside world, whether it be through a zombie threat as in Darren’s vivid piece ‘On the House’, or through the decrescendo of age, as in C.D. Menon’s quiet story ‘Spring Tides’. 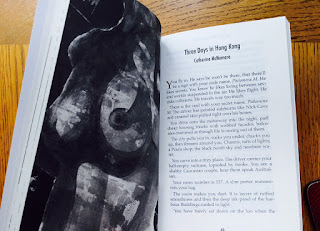 Sabotage Reviews has this to say: ‘Three Days in Hong Kong’ by Catherine McNamara pulls you strongly into the place where the code-named Philomena M. waits for her lover. She is suspended in a glass box – almost as New York magician David Blain once was – in a hotel room above the city of Hong Kong, trapped and yet in the end not so. In that place of heightened sensuality she upends the power balance in the relationship..

Here’s the buying link and Fugue II is also available at all good independent book shops. I’ll talk about Structo 14 next week!