At this year's International Conference of the Short Story in English, held in Vienna last July, I met two Australian authors. I don't meet Australians very often, let alone writers, so it was interesting to hear their take on the business of getting short stories together, and sending them out into the world. I read both Andy Kissane's and Cameron Rayne's collections while on the famous Corsican camping trip, and it was a treat to be transported back to Australian tones, smells and energy. 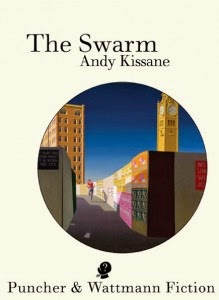 Based mostly in Sydney, Andy Kissane's book 'The Swarm' is a skilful unravelling of the stinging discomforts of love, its jostling and snagging moments; the extreme hunger of creative or physical desire that can thrust a man or woman beyond the perimeter of family. A cellist is driven by heartbreak to sell his beloved instrument; a slack husband falls for a food-obsessed office colleague; Marc Chagall introduces chickens into a Sydney flat and floats over the urban sky; a university lecturer falls hard for a sexy student while agonising over rape and violence in his own creative work. Kissane's quiet characters struggle with a swarm of elements: heartbreak, loyalty, reproduction, social conscience; as well as the lost pulse of coupledom, the loss of health, of youth.
Looking at the three of them, I felt this rush of emotion that I couldn't begin to name, except with words like shame and remorse and each word seemed weak when compared with the depth of my feeling. There was a longing to be with them, to feel the way I'd felt when I'd snapped the photo. ('Two Many Cream Buns')
Kissane's Sydney is scented, suburban, vivid, dishevelled. It was a magnificent tree and Xavier was glad it was still standing, rising above the sandstone retaining wall for thirty or forty feet, so the canopy of the tree was level with the top floor of the house. ('The Fibbing Bird') His language is intimate, we are between friends here. How to record a relationship? People often reminisce about how they met: at an auction of second-hand furniture; in the kitchen at a drunken party.. We look for these landmarks to explain how it all started, where we took off from, how we clicked. ('In My Arms')
I also liked the non-nonsense immediacy of Kissane's openings: Paul took her order and brought the Portuguese tart and skim latte back to her table. ('Old Friends') And his fast-paced first paragraphs as he heads full-on into the many discomforts of love and family. Even his endings are a treat, sometimes imploded with humour and ironies: If she had screamed at me like she normally did, I might have known how to respond, what to say, but the crushed look on her face, the tiny squeak of her voice was the most shocking sound I have ever heard. ('Too Many Cream Buns')

And for a gal who's homesick for her home town (Sydney), sentences like these had a wonderful resonance: Occasionally, we'd stop and rest on a sandstone outcrop under the shade of a gum tree, surrounded by bush. Listening to the birdcalls, you would scarcely credit that you were in the middle of a city of four million people, with its working harbour, its slums and its widening gap between the rich and the poor. ('In My Arms') 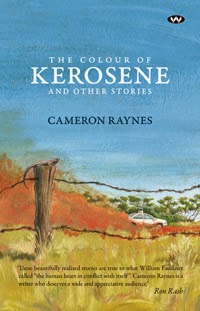 In a different key, Cameron Raynes' collection 'The Colour of Kerosene' is set along the continent's southern and southwestern coast and also ventures into the interior. His fearless, cutting language vitalises characters as they struggle as much against each other and their stark history, as against the merciless environment. His arms were brown, scarred, his forearms as thick as pythons. Not the defined, neat muscles of the gym, they were arms you got from working outside, straining fences, hoisting bales of hay, holding an animal still while someone else worked on its horns, teeth, or balls. ('The Colour of Kerosene')

Raynes' jarring opening story, 'The Colour of Kerosene', winner of the Josephine Ulrick prize, speaks of Luke, a taxi driver who accepts a fare deep into mallee scrub and almost fails to return. He brings Jess back with him to town, abused, maltreated step-sister of the despicable Pete, with Luke's losing streak of blackjack losses scrawled on her thigh. It's a searing, chilling escape.
Raynes' vigorous stories cover broad ground, dealing with suicide, fertility, violence, social degradation, developers, money, illness; as well as prisons, probation and Aboriginal child offenders. Families might be broken or disturbed: three generations of long-term-unemployed living under the same roof, a pitbull chained to a star picket banged into the middle of a leafless backyard that would turn into a quagmire in winter. ('Lives Less Valuable') And violence often lurks at the heart of each story: a man can get pulled out of a car in a country town and beaten 'up like shit' for killing a dog on the road; another man hauls off a dog that has mauled his daughter on the beach, and drowns it in the sea. I've never been inside Colac before. Polished jarrah boards - but everything else speaks of ambulances at four am - plastic chairs, bamboo ashtrays, tables bolted to the floorboards. Nothing that could maim if thrown. ('Lives Less Valuable')
There is a marked contrast between the haves and the have-nots, whether in terms of personal or physical riches: A pudgy little bloke in a green and white checked shirt got up from the next table as the passengers clambered out, all stretches and groans. He stood there, waiting, and then a girl came out of the bus, about twenty, no hips, skinny as a rat. She went straight for him, hugged him, and belted out a smile that could save your life. And here's me, wishing I was him. ('You Matter to God')

Or in 'The Eight-Hundred Dollar Cat', where an exasperated painted pisses on his buyer's overpriced feline.
I wondered how it would feel to own such a house. Would it make you stand taller, straighter; would it allow you to look more people in the eye?
Raynes' characters are often wounded by life and overturned by relationships that have run aground. His powers of observation almost hurt. A tiny muscle in the corner of her mouth ticked away and Dan could see she wasn't happy with where her four years of uni had landed her.  ('Lives Less Valuable')

Both 'The Swarm' and 'The Colour of Kerosene' have been published by smaller Australian publishers (Puncher & Wattmann Fiction, Wakefield Press) and bring gritty, sensual worlds to life. If you are a homesick writer like me, interested in returning to a faraway world, both books introduce striking and enduring characters and themes. Or if Australia is a clichéed concept whose deep, dirty truths you think you might like to savour, both books are contemporary and potent.