A Lost City and Photo of Haji Nur 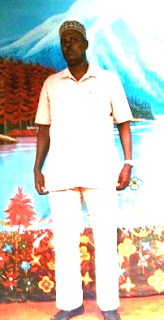 I didn't really mean for this blog to become an Africa-vent for me. The short stories in the Pelt collection are varied. Some are set in Europe or Australia. Some are set in Africa and travel close to the seam of my life. One is set in Somalia, for example, where I was a young wife without a clue how to mother.

The other night I felt a jarring when I saw my old street in Mogadishu on the news. There had a been a bombing at the National Theatre of Xamar, whose whining singers used to go on and on into the night, almost until the morning muezzin. I saw the junction where twenty years ago a cunning thief put his hand into our jeep and stole my young husband's glasses. I saw the hill we used to chug up to our turn-off, a rutted dirt road where one evening we found a blabbering man, an ex-soldier, who used to live in our street. He had fought in the Ogaden border world and lost his senses, his family, and years of his life.

I don't think of Somalia often except in bursts of guilty pain. It was my first foray out of Europe, the first strange tongue I began to learn beyond the European languages I'd learnt in high school, the first African capital I explored on foot with a driver who was as skinny as myself. It was the first time I ever had help in the house, slow Faduma who pasted magazine cut-outs on our walls and cooked fermented bread like pads of white earth.

The guilty pain comes because I wonder. I don't know what happened to my co-secretaries from the office. It was pre-internet, we left in a rush when Siad Barre's young quat-chewing soldiers took the centre, claimed cars, killed and raided houses. I don't know what happened to the children my friends were trying to raise, or those who came after in their complex and - for Westerners - uneven marriages. I just don't know. Every time I see a tall Somali man and recognise their gutteral language I don't know what to think - was he a man who as a young soldier shot at women in a market? Or a man who truly wants to harvest peace for the future?

I remember my first-born receiving his first vaccination in a filthy clinic that made me grimace. I told myself, be equal, your son is living here - quite a joke given we were able to escape. I remember the tough exterior of Somali women colleagues, so fragile and damaged inside. I remember the flat rooftop of our old Italian-built house with the spiral staircase, watching an eclipse of the moon with our watchman Elmi, the way the city cascaded down towards the sea.

Elmi was gunned down by troops soon after we left.
Posted by chillcat at 03:43